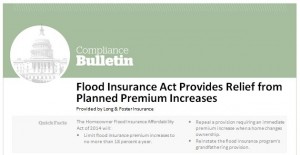 Learn more about the Flood Insurance Act and how it helps property owners in coastal areas and other high-risk flood zones in the latest Compliance Bulletin from Long & Foster Insurance.

Below, you can read our previously published article about the flood insurance changes that were planned with the Biggert-Waters Flood Insurance Reform Act of 2012.

Published Feb. 11: Flood insurance increases are coming (and for some people, they have already arrived). What is problematic is that it is not clear who will be affected and how much the rates will rise, and that uncertainty, according to Patrick Bain, president of Long & Foster Insurance, is the biggest challenge to both homeowners and prospective buyers.

“The flood insurance rates could make it cost-prohibitive for someone to buy a home or even keep their home,” Bain said. “There are too many unknowns for the consumer.”

Why are flood insurance rates increasing?

Put simply: the government can no longer sustain the National Flood Insurance Program (NFIP). So in July 2012, Congress passed the Biggert-Waters Flood Insurance Reform Act, requiring an overhaul of the program. NFIP is about $20 billion in debt to the U.S. government, according to 2012 estimates from the Government Accountability Office, and Biggert-Waters aimed to bring the program into financial stability by reducing the number of subsidized plans NFIP offered.

Until recently, the NFIP subsidized about 20 percent of its policies, which included any residential and commercial properties that were built before the first Flood Insurance Rate Map (FIRM) was adopted. These so-called pre-FIRM properties, however, were often located in higher-risk areas, and with the subsidies, the rates didn’t “reflect true flood risk,” according to the NFIP.

What did Biggert-Waters require?

Homes in high-risk flood zones that received subsidies on their flood insurance premiums would face increased rates, although the changes were planned in stages, with some homeowners paying higher rates starting last year and others free from increases for the time-being.

For example, if you had a second (or vacation) home in a flood zone and previously received subsidized rates, you saw a 25-percent increase in your rates starting in January 2013. Another 25-percent increase will come this year and the next two years until you reach the full-risk amount. Commercial property owners with pre-FIRM rates also experienced a 25-percent rate increase, beginning Oct. 1, 2013, and their rates will continue to increase 25 percent each year over the next three years.

The only people exempt from these automatic increases are pre-FIRM property owners who have never filed a claim and whose policies were in effect before July 6, 2012. But even they will face increased rates if they substantially improve their property, incur a future loss or let their policy lapse. In addition, anyone buying one of these pre-FIRM properties will face full-risk rates from the get-go.

How much are full-risk rates?

It depends on the property’s elevation and flood zone. Flood zones A and V face the highest risk, so they will face the greatest increases. Similarly, a property with an elevation that is below what is considered “base flood elevation” will face greater increases than one that is at or above that level. And it would not be an insignificant difference—in fact, the Federal Emergency Management Agency estimates a range of $553 to $10,723 for a single-story structure on the various base flood elevations.

Bain of Long & Foster Insurance said it is important to recognize that flooding affects more than just areas along the coast. Communities on rivers and other waterways, as well as developments undergoing new construction, can be susceptible to flooding from runoff and rising waters. Bain explained that downtown Washington, D.C., as well as Baltimore, Md., and Richmond, Va., are vulnerable to flooding, mentioning that Virginia and Maryland are among the states with the highest flood claims.

How do I know if I live in a flood zone?

On NFIP’s website, FloodSmart.gov, you can determine your property’s “flood risk profile” by entering your address into their online application. If your home is located in a low- to moderate-risk area, FloodSmart.gov will also estimate your premiums; however, high-risk areas also need an elevation certificate, as well as other property details, for premium estimates.

Property owners should also note that America’s flood zone maps are set to change, and while the government previously allowed people to pay grandfathered rates (that is, the rates according to the old maps), Biggert-Waters calls for that practice to stop in late 2014 or soon after. With these revisions, homes that were not in flood zones may now face requirements for flood insurance. The reverse is also possible, but like Bain said, it is the uncertainty of what will happen that is of most concern.

So what should I do?

Preparation is key. If you are looking for a new home, chat with both your insurance and real estate agents to assess your risk. You will want to ask about the property’s current flood zone, whether any claims have been filed in the past few years, and what coverage you will need for the home. If you own a home that is in a high-risk zone, your insurance agent can help in the process of acquiring your elevation certificate and determining your rates.