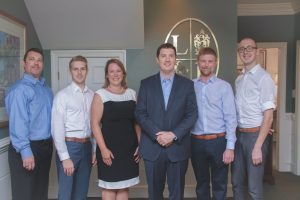 Alex Glaser and The Glaser Group were recently named Best Real Estate Agent in a reader poll conducted by Style Weekly, a Richmond, Virginia, news and lifestyle magazine. It was the group’s second consecutive year in the No. 1 spot and fifth appearance in a row in the top three.

The Strum Group, a Long & Foster team led by James Strum, took second place in the poll. It was the group’s second consecutive year placing in the top three. Both

teams are based at Long & Foster Real Estate’s Grove Avenue office in Richmond.

“Alex and James both deserve the high rankings that they and their groups received in the Style Weekly readers’ poll,” said Brian Haug, Long & Foster senior vice president who oversees the Richmond region. “These are agents who know and love Richmond. They work hard to provide great service to their clients, and they give a lot back to the community.”

The Glaser Group has been in the real estate industry for nine years, joining Long & Foster in February. Animal lovers and pet adoption advocates, the group contributes a portion of every transaction to a local no-kill animal shelter, Richmond Animal League.

“We’re extremely appreciative of all our great clients, and the repeat business and support they keep providing us with,” Glaser said.

Strum, who started his career with Long & Foster 12 years ago, said he and his team strive for a consistently high level of customer service, and the Style Weekly rankings show that clients appreciate the extra effort.

“Our slogan is: core values, proven results and team excellence,” Strum said. “We really try to embody that on a daily basis.”

The Strum Group contributes a portion of each transaction to help a variety of local charities, including the Connor’s Heroes Foundation, which helps kids battling cancer, as well as Richmond Friends of the Homeless, Stop Child Abuse Now (Richmond Chapter), and Full Circle Grief Center. In all, the group has given more than $60,000 over the past two years, Strum said.

For its annual Best of Richmond issue, Style Weekly reported over 45,000 people cast more than 85,000 votes in “a host of categories.” According to the publication’s website, voting was open to anyone with Internet access, and who registered online. Participants could vote only once per account, and ballots were cast anonymously.