Robert B. Moss, a top real estate agent with Long & Foster | Christie’s International Real Estate in the Richmond region, was recently recognized by Richmond Triangle Players, which renamed its theater in his honor.

“On behalf of the board, staff and all the artists associated with Richmond Triangle Players, we are thrilled to rededicate our venue to honor Robb Moss, whose vision and forethought is a cornerstone that has helped build RTP into the significant cultural institution it is today,” said Philip Crosby, executive director of RTP.

The rededication of the Robert B. Moss Theatre took place at an event held April 26 at the venue, and entertainment was provided by actor-singer Chris Hester, who recently played the title role in the company’s production of The Boy from Oz, and jazz chanteuse Emme St. James.

“I’m thrilled to be a part of making this happen,” said Moss. “Finding a home for RTP and enriching the cultural arts for the Richmond community makes this honor even more special.” 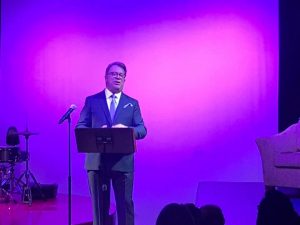 Robb Moss speaking to attendees of the theatre’s dedication.

Moss said he was inspired to get involved by a presentation he saw at Richmond Triangle Players’ 15th anniversary celebration nearly 10 years ago. At the time, the company was performing on a postage-stamp stage on the third floor of Fielden’s nightclub, and the building itself was crumbling around them. At the anniversary celebration, the organization laid out its vision for a new home.

“It wasn’t even a week later that Robb came to us at RTP with an idea for a building that could be renovated into the kind of theater we needed,” Crosby said. “He not only located the theater, but bought it for us.”

Richmond Triangle Players Board President Julia Flenner said, “Back then, there was no way any bank would have given RTP a mortgage on that property. Robb put his reputation – not to mention his credit score – on the line for RTP because he believed in us and what we were doing. Sometimes an angel arrives at just the right time.”

Moss is a Richmond native and a graduate of the University of Richmond. He is a top producing Realtor with Long & Foster’s Westham Sales office, has been in the real estate industry for more than 15 years and specializes in historic properties. He has been a high-achieving sales associate throughout most of his career, providing exceptional service to all he works with and building a loyal clientele. Prior to his career in real estate, he worked in the financial services in the healthcare industry.

The new theater is a 4,000-square-foot performing arts facility that accommodates flexible seating arrangements for up to 90 patrons. It includes a lobby with a bar area, catering capability and a box office. The theater can be set for both traditional and cabaret-style seating, and the building is fully ADA compliant, with parking and comfortable restrooms.