Long & Foster Real Estate, the exclusive affiliate of Christie’s International Real Estate in Washington, D.C., and the largest independent residential real estate company in the United States, is pleased to announce that its Georgetown office is sponsoring the Citizens Association of Georgetown’s Concerts in the Parks series. The next concert features Laura Tsaggaris and it will be held on Sunday, July 13, at 5 p.m. in Rose Park, located at 26th and P streets in Washington, D.C.

“The Citizens Association of Georgetown brings together the many individuals and families who live and work in our fine community, and we’re thrilled to be part of their organization and to support their Concerts in the Park series,” said Roger Carp, manager of Long & Foster’s Georgetown office. “Many of our real estate agents actively volunteer with the association, and sponsoring the concert series is just another way that we can give back to the area.” 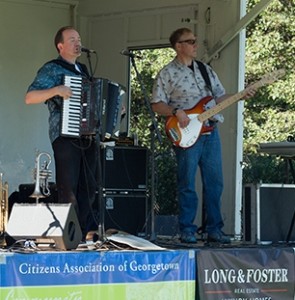 Numerous Long & Foster agents from Georgetown, including Derry Haws, Emmanuel Sturley, Robert Hernandez, Marjory Hardy, Patricia Sonaty, Erin Sobanski, Olena Norman, Natalee Snider, David Snider, Judy Gyllensvaan, Salley Widmayer and Benton Snider, as well as Carp, also contributed to the concert series in other manners. At the June event, the agents helped organize and run a photo booth where concert-goers could get their pictures taken at no charge. They also held drawings for prizes at both the previous concerts, and they have planned another giveaway and photo booth for this month’s performance.

Long & Foster is one of many organizations that support the Concerts in the Parks series, which is free to attend and open to all members of the community. The July 13 concert is the last scheduled concert for the summer, and you can read more about the event at http://www.cagtown.org/content/concerts-kick-off.