The condition, style and number of the bathrooms is a common make-or-break item for home buyers. Over the past five decades that Long & Foster has been in business, agents have watched the humble restroom evolve from functional get-in-and-get-out space to spa-like retreat.

Consider that in the late 1960s, it was rare for homes to have more than one full bathroom. By the early 1970s, 40 percent of new homes had 1.5 bathrooms or less, and only 19 percent had 2.5 baths, according to the U.S. Census Bureau.

Today’s homeowners value those private spaces a lot more. For 2017, the census found of 795,000 homes built, 3.7 percent had 1.5 bathrooms or less, and 37 percent had three or more bathrooms. This year, bathrooms overtook kitchens as the most popular room in the home to remodel, according to the National Association of Home Builders.

“When a buyer sees outdated bathrooms, they’re mentally calculating how much it would cost to renovate,” said Courtney Martinez, a Long & Foster agent in the Williamsburg, Virginia area. “Updating a bathroom is one of the best returns on your investment. Trying to keep within a budget? Updating the vanity, fixtures, lighting and paint can go a long way!”

Not only has the number of bathrooms changed, but the styles have evolved. Homebuyers like new, modern fixtures and designs, and a bathroom renovation ranks third among home improvements buyers prefer (behind complete kitchen renovation and kitchen upgrade), according to the National Association of Realtors’ 2017 Remodeling Impact Study. 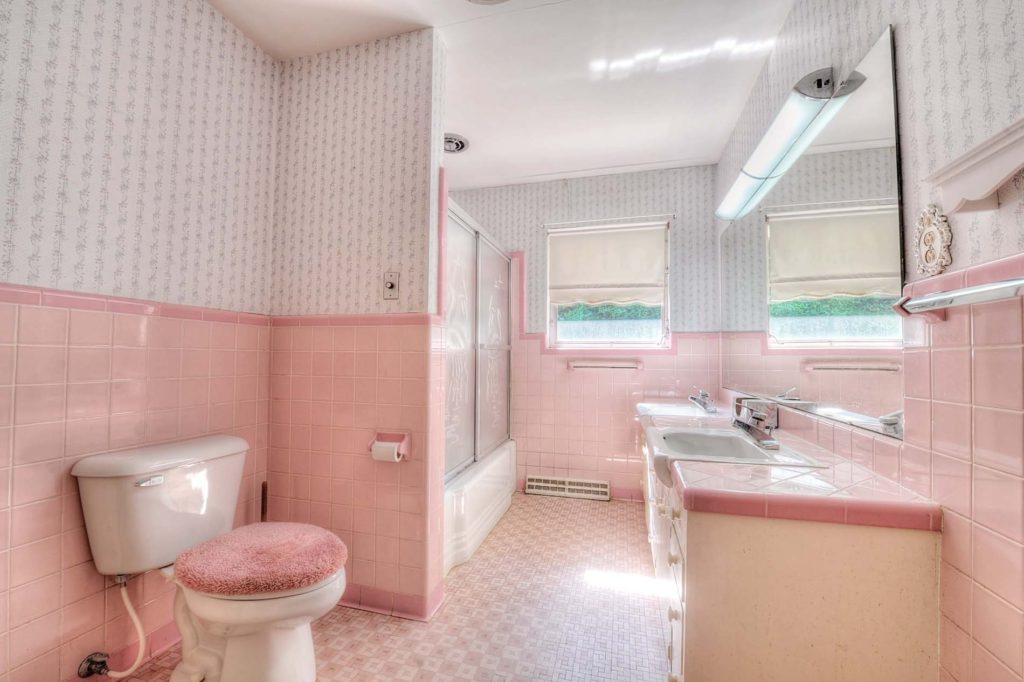 One style of bathroom that would have been in homes sold in 1968.

The 1960s
What would the 1968 home’s one full bathroom have looked like? Wall-to-wall colorful tile was not uncommon. It’s said that Mamie Eisenhower’s penchant for pink inspired a nation in the 1950s and into the 1960s. Mint green and blue were popular bathroom tile colors, too. The late 60s also brought psychedelia and bright hues.

The 1970s
The bell bottoms decade ushered in a switch to more earthy colors, and new materials like laminate countertops and vinyl flooring. Wall-to-wall shag carpeting wasn’t unheard of in the bathroom.

The 1980s
In the 1980s the bathroom began to evolve into a retreat. Bring on the big, corner whirlpool tubs. It was an era of conspicuous consumption, over-the-top glamour and rising home prices. The median home price rose to $120,000 in 1989 from $64,600 in 1980. Victorian style became popular too, with chintz, frills and dusty pastel colors.  Remember the popular combination of peach and teal, or hunter green and mauve?

The 1990s
The 1990s brought more cabinetry into bathrooms, and the corner tub remained popular. A large double-sink vanity with a huge mirror, and maybe even Hollywood-dressing-room-style lights became standard amenities in newly built homes.

The 2000s
At the turn of the new millennium, homes incorporated a more spa-like atmosphere in the master suite. Bronze fixtures and glass-enclosed showers rose in popularity. Granite started showing up in the bathroom more, as well.

This modern bath has a frameless glass shower enclosure.

The 2010s
Today, the enduring trend for the owner’s suite is wood cabinetry in gray or white, according to the National Kitchen and Bath Association. Quartz has become the most popular counter surface in both the kitchen and the bath.

Freestanding soaking tubs also are in, with 87 percent of respondents to the NKBA’s most recent annual survey reporting this as their preference. There is a rising trend, however, of homeowners foregoing a tub in the master bath, in favor of a large, luxurious shower.

Technology is also entering the space. What used to be arguably the most utilitarian room in the house can now have toilets with nightlights, and that self-clean and flush automatically. You could add a towel warming drawer, or have a mirror that conceals a television. Your shower and toilet, along with seemingly everything else, could soon come with digital controls. Who knows what the future will bring?